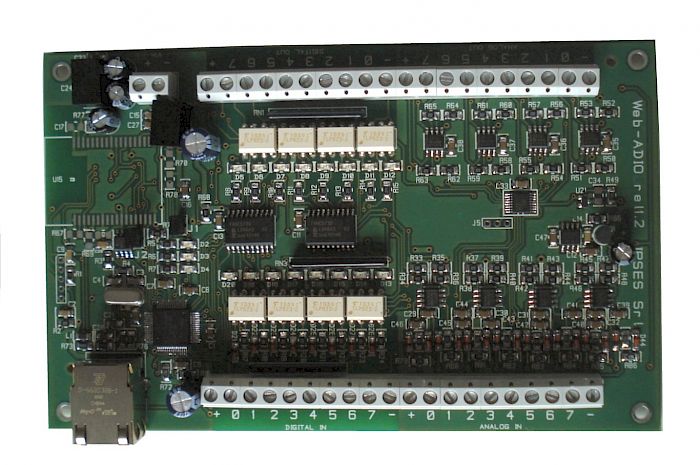 WEB-ADIO is a card to manage 8 optocoupled digital inputs, 8 analogical inputs, 8 optocoupled digital outputs and 8 analogical outputs with Ethernet interface, equipped with a web, telnet, and SNMP servers. The WEB server allows to connect and to manage the card using any web browser (i. e. Internet Explorer), with no needs to install a software on your PC, as it is possible to see at the following link: http://demo.ipses.com/WEB-ADIO

Besides, the card can be connected directly to a switch or to a router. It is also possible to develop a customized software managed by telnet or SNMP service.

WEB-ADIO can be directly connected to PLC, to input devices from operator and to other I/O systems.
Each input and output status can be read by a web browser or a telnet client at any moment, besides the status of digital inputs and outputs is shown directly on the board thanks to LEDs fixed on.

The use of Ethernet interface and the implemented WEB and telnet servers allow WEB-ADIO high speed, totally hardware independence, flexibility in the expansion of connected cards.

The board size is the standard European Format Card so that it can be easily integrated into several systems. Besides, WEB-ADIO has its digital inputs and outputs galvanically isolated to protect from electromagnetic disturbances and ground loops, improving its reliability and quality.
The analogical inputs and outputs have an operational range from 0 up to 10V, with a resolution of 10mV (10 bit ADC) and are calibrated one by one.

WEB-ADIO is provided with a software for Windows environment, based on telnet service.

WEB-ADIO is a control system integrated on a board with standard European Card format (160 x 100 mm). For working, the board requires an external power supply (between 15V and 32V, in direct current).WEB-ADIO is able to acquire and control digital and analog signals. The digital interface consists of eight inputs and eight outputs galvanically isolated from each other and from the rest of the board; the analog interface consists of eight inputs and eight independent outputs, with 10-bit resolution, operating in a voltage range of 0-10V. All analog I / Os are individually calibrated. The instrument is controlled and configured via an Ethernet interface thanks to an HTTP or MIB browser, or a telnet client, or using the demo software provided with. The board is also equipped with a non-volatile memory on which it is possible to memorize the status that every single output will have at the power-up. The card allows you to upgrade your firmware directly from the web page, without the use of dedicated hardware or software.